Without second thoughts, women and men alike wear a cross like a simple heart, arrow or flower. 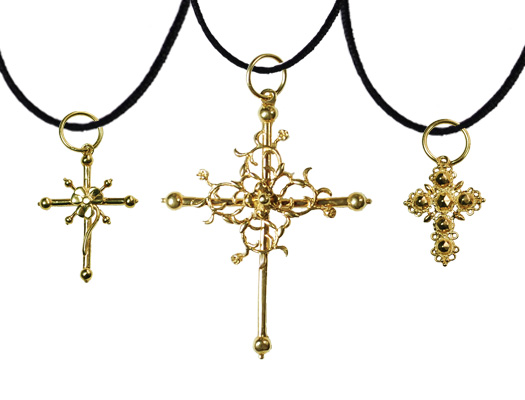 Crosses have become an offbeat and debunked fashion accessory. Major brands have no taboos when it comes exploiting these largely Christian symbols, most often found as pendants. Those by Harry Winston or Cartier are divine with white diamonds. The sacra-sanctity models from Dinh Van are in gold and pieced at the centre. The young creator, Elise Dray, has created a whole range including earrings, rings and bracelets. What they all love about the cross is its pure graphic quality and the chic allure of its two simple bars and right angles – they certainly don’t see the austere and morbid symbol of Christ’s passion! It’s a classic jewellery theme which goes beyond merely Christian symbolism, and sticks more to this magic and mystical symbol used to represent the crossing of paths and destiny. Today, regional crosses like those by Eliane Roudillon are also extremely successful. Her filigree Artois crosses and Jeanette crosses adorned with a pansy or tulip at their centres are especially delightful! “They were often the only jewellery piece peasants owned once,” points out the historian, Claudette Joannis. “Already in the courts of Louis XV and Louis XVI, aristocrats had adopted wearing them by sheer coquetry and without a thought given to their signification.” One only needs to think of this extremely poignant symbol in the hands of American rappers, decked out in bling-bling style crosses, studded with diamonds and who scandalise with their rapped allusions to God. Or even of pallid faced Gothics with black eyeliner who swear by the symbol’s satanic side. Provocation and an exaggerated sense of aestheticism; could these be the only reasons for wearing this religious trinket?  It’s best not be fooled by appearances. If the cross as a religious symbol has all but disappeared, maybe hidden somewhere in there, could be a genuine spiritual investigation – a sort existential quest.